Welcome to my newest feature- Wonder (Woman) Wednesday! In this feature I will be sharing/reviewing a variety of different Wonder Woman comics. This feature is going to be aimed at new fans or fans who are interested in reading more about Diana Prince. Up first we have Rebirth series lead by writer Greg Rucka 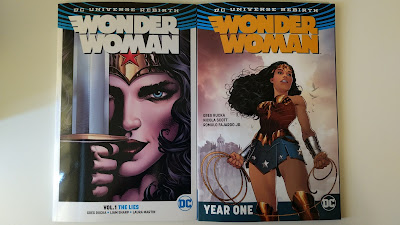 These anathologies are among the newest Wonder Woman comics out there but that doesn't mean that they are lacking any of the charm of the original Diana Prince that the world fell in love with.

In Vol. 1 Diana struggles to remember who she is, what she has done and why she is in the world. That doesn't keep her from fighting hard to save innocents though! This volume is pretty neat because there are many well-developed women who are good, bad and a little bit of both.

In Vol. 2 We jump back in time and get to see the very first events that occurred to lead up to the events of Vol. 1. It doesn't give us the entire picture but its just enough to hook you in until you NEED to know more!

Both volumes are quick reads (I read each one in an evening). They have beautiful colour panels and the facial expressions on the characters are so amazing and intricate! As well, there are covers and alternate covers from each comic included in the volume.

These comics are a great place to start if you are looking to read more about Diana because they've got a great mix of connections to the movie plot, as well as newly introduced plots. We get to see the Steve Trevor and Diana Prince that we love, as well as many new characters. This comic does a pretty good job in terms of diversity with multiple characters of colour, and LGBTQ characters.