"Cinderella, Necromancer is Chime meets Anna Dressed in Blood and was inspired by a real medieval grimoire of necromancy from 15th-century Germany.

Ellison lost her mother at an early age. But since then, her father has found love again. He's happy and doesn't quite notice that Ellison does not get along with his new wife or her mean daughters. When Ellison discovers a necromantic tome while traveling the secret passages of her father's mansion, she wonders if it could be the key to her freedom. Until then, she must master her dark new power, even as her stepmother makes her a servant in her own home. And when her younger brother falls incurably ill, Ellison will do anything to ease his pain, including falling prey to her stepmother and stepsisters' every whim and fancy.

Stumbling into a chance meeting of Prince William during a secret visit to her mother's grave feels like a trick of fate when her stepmother refuses to allow Ellison to attend a palace festival. But what if Ellison could see the kind and handsome prince once more? What if she could attend the festival? What if she could have everything she ever wanted and deserved by conjuring spirits to take revenge on her cruel stepmother?

As Ellison's power grows, she loses control over the evil spirits meant to do her bidding. And as they begin to exert their own power over Ellison, she will have to decide whether it is she or her stepmother who is the true monster. "

I was super interested in the premise of this book because I'm a sucker for fairy tale retellings! I'm not a fan of the original Disney Cinderella movie but there have been some really great adaptations of Cinderella! The thing that drew me in the most was that this retelling seemed like it was throwing it back to the dark, grim, original fairy tale stories. And oh boy was that true.

Retellings can be a tricky thing because you have to balance the original source material that people know and figure out how to make it interesting and new for your readers. Boughan did a masterful job of weaving old familiar plot with new and exciting twists. There was a beautiful balance between the Cinderella story that people already know and love, but there was also new plots that fit in so well.

There were many times throughout the book where I was sure I'd figured something out and I just HAD to keep reading. Or I'd have two theories and was just dying to see which one was true. It definitely had a nice, fairly fast pace where just as a the reader was feeling comfortable BAM a new twist was introduced.

The way that necromancy and magic was introduced to the story was also very intense and engaging. Sometimes I wanted to scream out to Ella and give her some advice. I've read a lot of books with magic but the way that the necromancy was developed was unique to anything else I've read. In particular I thought the religious tones were very cool and also historically accurate.

I don't know if I've ever heard the prince in Cinderella as having an actual name before but it sort of helped me to ground where the story was taking place. Plus who doesn't love a prince named William?!

I think this is one of my favourite written Cinderella stories and I loved the characters so much that I really hope we get to see more of them! 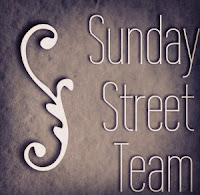 You can check out the other Sunday Street Team posts for today here:
Omg Books and More Books
A Thousand Words a Million Books
Posted by Ilsa at 00:00