Dust on the Wing 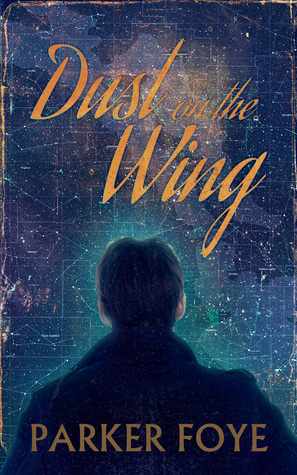 Captain Tam spends his life travelling through space on his beloved ship, the Paradigm Princess, and he likes nothing better than being alone with the horizon. However, when a routine stop on his favourite planet brings an unexpected new crew member, he breaks routine and agrees to take her on board—because if Tam plays this through, the powerful Marquis will owe him a favour. Surely that's worth a detour. (x)

Note from the publisher: Dust on the Wing is part of LT3's Solitary Travelers collection, a set of individual stand alone books by different authors that feature asexual and aromantic main characters.

To me this book had a major Firefly vibe to it which I loved! I'm a huge fan of sci-fi fantasy books and lately space has been my favourite. In particular I enjoyed that everything wasn't perfect, Tam's ship is a bit old and broken down and in general is pretty rag-tag.

I requested this book specifically because I was interested in the space/sci-fi universe of the story. It was only afterwards that I realized that Dust on the Wing was a short story from a book featuring asexual and aromantic  characters. I was pleasantly surprised by how realistic the relationships and identities of these characters were, Tam in particular. I think this story will appeal to lots of people because I know lots of people are looking for stories with representation, that are fantasy and sci-fi and were their representation isn't the sole focus of the story.

I think my biggest beef with this book is that it was only 56 pages! I could have read way more but I definitely saw a lot of potential in this story and it made me want to pick up the other books in the collection (once it comes out!) Despite being only 56 pages this story had its share of twists and turns with surprises and drama for all!