Save the Date! The Girls from See Saw Lane

The Girls from See Saw Lane 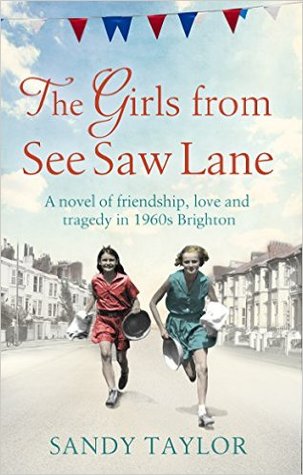 Dottie and Mary forged a friendship over a bag of penny sweets when they were eight years old. They’ve shared everything together since then – the highs and lows of school, family dramas, hopes and dreams and now, at seventeen, they’re both shop girls, working at Woolworths.

As they go out in the world in pursuit of love and happiness, the simplicity of their childhood dissolves as life becomes more complicated. The heady excitement of first love will consume them both, but the pain of unintentional betrayal will test their friendship in ways neither of them could ever imagine…(x)

My friend and I were talking the other day about our favourite kind of books to read while we were in university and one of the things we love is contemporary stories set in historical fiction- which this book reminds me of a bit. And while it wasn't necessarily that out there historically, it definitely had that tone (for me at least) because of its setting. I don't know much about the 60's and I definitely don't know much about Britain at that time.

Dottie and Mary were super cute characters and I really enjoyed getting to see their friendship as it started out and then as they grew up together. They actually reminded me a lot of my relationship with one of my friends (to a point!) and I thought it was nice to see this particular kind of relationship in literature. There are so many times when two girls are pitted against each other and for once it was nice to see two girls who loved and supported each other throughout their lives.  That being said this book drove me crazy at times! I got frustrated with the characters and their reactions to things- I guess I just really wanted them to be mad, to get angry! Especially Dottie- that girl went through a lot and she always just seemed to be okay? She must be a lot stronger than me then because I would not have been so calm!

I did really enjoy this story, it was a perfect 'university read', light and entertaining but with enough character depth to keep me interested and engaged as I read it. Sometimes the British-isms were a bit confusing, especially for words that mean one thing in Canada and a completely different thing in England. Overall this story was very enjoyable and at times I guessed the plot line but then a twist would come up that just blew me away. The emotions were so intense in this book and it made me think of all my best friends who are scattered around and I missed them, which I think lead to even more emotions for me. The girls were so young! I am older than them but they went through so much together, it was just incredible to read

Save the date for this book- it comes out in Decemeber 4th! I would recommend it to anyone who loves stories about female friendships, books set in the past or in Britian and for anyone who wants a emotionally stirring read!