Peeking at the Shelves

Taking A Look at Numbers


In the book community there is a lot of talk about women authors, and women YA authors in particular. In media however it is the male authors that are represented as being ground-breaking and creating their own genre (refering to the made up genre of "Green" after John Green which he himself disagrees with)

So for fun I thought I would take a look at my bookshelves and do a little analysis on them. I'm going to split it up into two posts- my favourites bookshelf and then my other bookshelf (I like the ones on that shelf too). It should be noted that my Favourites Bookshelf is smaller so it doesn't contain all my favourite books. Its mostly organized that way because then my mom can easily find the books I recommend to others!

This post will be all about my Favourites Bookshelf

The first thing I decided to look at was the gender distribution of the authors on this self. And the results where no surprise to me. 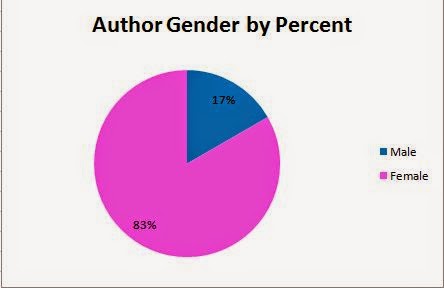 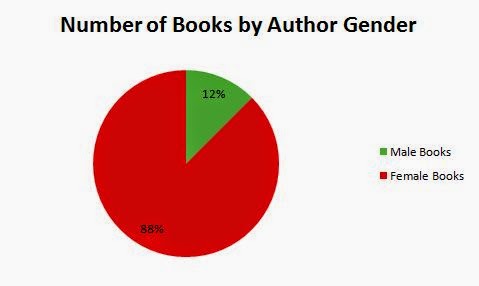 Of the 128 books I would consider 12 to be non YA but some of them fit into multiple categories but they ALL have teenage or young adult characters in them.

Another thing I decided to look at was the most owned author which was the author(s) that I have multiple books of. Here were the results: 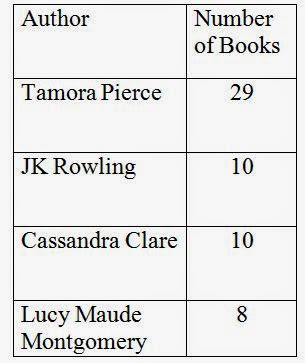 All four of the authors with the biggest number of books are women. I own ever Tamora Pierce book (5 quartets, 2 trilogies and others), all the Harry Potter books by Rowling (including the Hogwarts textbooks), all the Shadowhunter books by Cassie Clare and all the Anne of Green Gables books by LM Montgomery. (I actually have quite a few of her books but some of them are on my other shelf. If I had to guess I'd say that I have about 10 more)

Just for contrast I decided to look at the male authors on this shelf. It goes as followed: 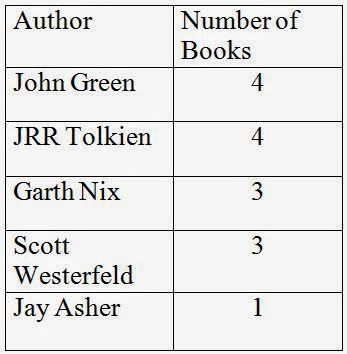 The male authors on my shelf have significantly fewer books. One of the John Green books is co-authored, I have the four Tolkien LOTR books, The Abhorsen Chronicles by Garth Nix (and I think I have another book of his on another shelf), the Leviathon series by Westerfeld (I have Uglies on another self) and just one book by the fifth male author.

Interesting given that the media makes it seem like male author are THE BE ALL END ALL of YA. And I'm not saying that they aren't good and even great authors. I'm saying that there are amazing women authors who get ignored because well, they are female.

So I'm going to continue loving my female YA authors and recommending them far and wide, because we need some good female representation. (I'll still read man books though) Plus all my favourite authors are women and they write the kind of books that I just HAVE to share with everyone.