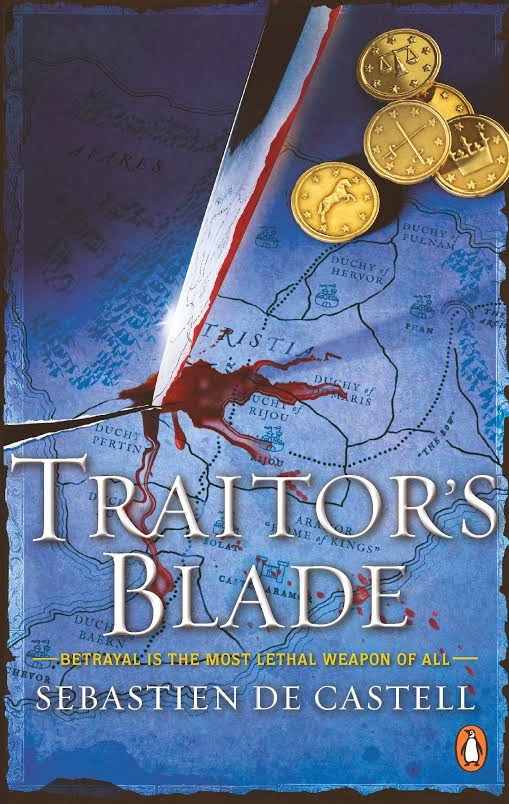 Falcio is the first Cantor of the Greatcoats. Trained in the fighting arts and the laws of Tristia, the Greatcoats are travelling Magisters upholding King’s Law. They are heroes. Or at least they were, until they stood aside while the Dukes took the kingdom, and impaled their King’s head on a spike. (more at Goodreads)

I was chosen to be part of a blog tour for Traitor's Blade by Penguin Canada and given the opportunity to read an advanced copy of this book. This in no way effected my review/rating.

As you can see I gave this book a 4.5/5 meaning that I really, really liked it. As I've done before I'm going to split my review up into what I liked and what I didn't like. (That way you can way rate the pro's and con's yourself)
What I Liked:

The genre of this book is right up my alley. It's a fantasy book with lots of adventure and fighting etc. The writing is masterful with a superbly created world and well-woven storyline and all sorts of little things that tie together in the end. Within the first few chapters I was completely drawn into the world of Traitor's Blade, but the thing that really made me love. it first was this quote:

I loved that the girls could fight and that women weren't just love interests, they were villains and saviours and interesting and fully developed. I found the main characters were very likable and relatable, they didn't make it feel like a story. The entire novel felt like more than just a story, it seemed to be realistic. My explanation might not make sense but I absolutely loved this aspect!

Also I absolutely loved the Greatcoats and could imagine them in my head. Now I want one though. Such a unique idea surrounding them. I think that they should be a necessity for all people in our society! (Because that'd be cool!)

I found some parts of the story to be very predictable but overall there were enough twists (both big and small) to make up for it. Another thing that sort of bothered me was that I oftentimes would forget about the overarching quest/reason for the journey, however I'm not really sure if this is a good thing or a bad thing! Other than these few bumps I really enjoyed this book and am super excited for the next one!

So in a nutshell I would recommend this book to people who enjoy fantasy, long books full of adventure and fans of books like The Deeds of Paksennarion, The Song of Fire and Ice series and the likes!